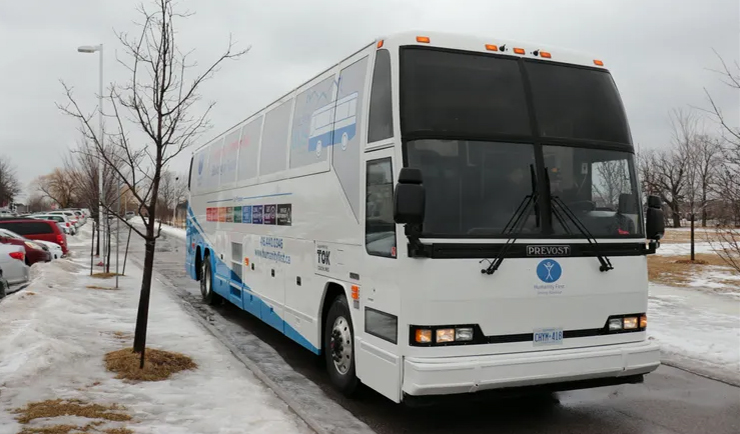 A local transit professional has come up with an innovative way to provide emergency mobile shelter beds, much needed in Ontario’s biting winters, by retrofitting end-of-life coach buses.

Naeem Farooqi, Principal Consultant at WSP and volunteer with Humanity First, and a team of volunteers have been working tirelessly to launch Shelter Bus this year. To date, his team has raised $55,000 to retrofit their first bus, which will be outfitted with 20 beds, a kitchenette, lounge space, bathrooms, and wireless internet.

For Want of a Bed

In 2018, 93 homeless people died in Toronto, according to Toronto Public Health. This same year there were 27 extreme cold weather alerts, when temperatures were expected to reach below -15 C. Local shelters are in crises, with a chronic shortage of beds. Shelter Bus will cost less than a traditional shelter to operate and can be driven to a different location every night to respond to changing demands. The bus will provide a safe, comfortable place for people struggling with homelessness to sleep overnight.

Getting up and running

Shelter Bus went from idea to demonstration in just six months. The volunteer board officially launched its fundraising efforts in November 2019 at the annual Humanity First dinner. With enthusiastic support from the Transit industry, Farooqi and his team were able to acquire a bus, install improved HVAC unit and blinds, and paint and decal the exterior. While the vehicle is insured and street-ready, Shelter Bus is still fundraising to raise the final $145,000 needed to pay off the remaining balance of the first conversion ($45,000 still needed), and to get started on the upgrade to their second donated bus (estimated at $100,000).

The greatest challenges were getting insurance for the vehicle and approval from the municipal government to operate, Farooqi said. But the team persevered and are now ready to roll into action.

According to Farooqi, 900 buses in Canada are disposed of every year. There’s lots of life still left in them, he argues. And the numbers agree: the report ‘Useful Life of Transit Buses and Vans’ found that buses whose recommended minimum retirement age was 12 years were still going strong. The actual average retirement age was 15 years – with some agencies using 22-year-old vehicles!

The Shelter Bus will work with homeless shelters in the Greater Toronto Area and will be put into full service from 8 p.m. to 7 a.m. beginning November 29. It will operate overnight with a certified volunteer driver and two caretakers. Clients using the Shelter Bus for the night will receive a care package and pre-prepared dinner. Using the onboard facilities, they can relax, watch TV, freshen up and get a good night’s sleep. In the morning, the coach will return to a secure facility for cleaning and maintenance.

Farooqi said that feedback from the homeless community has been positive. “They really like the bus and can’t wait to use it,” he said. “Many have told us the mobile nature of the bus is good.”

To learn more about Shelter Bus, check out their website or social media at Humanity First Canada. If you would like to support their cause, you can also donate online.