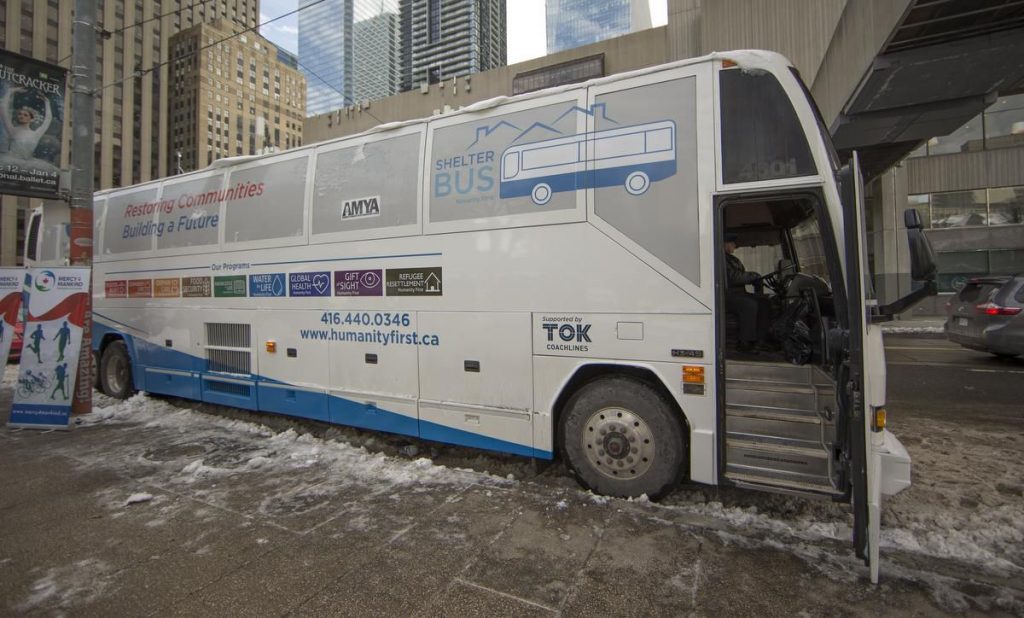 Park ‘n’ sleep. Perchance to dream. Definitely to warm up and rest a while.

A city that often throws its down-and-out under the bus — despite the mega-millions also thrown at the chronic urban blight of homelessness — is just a little bit kinder today, a tiny bit more big-hearted.

Although the city — as in The City — has nothing to do with this particular gesture of benevolence towards the destitute.

What was once a transit bus, and most recently a coach for travelling hockey players in Quebec City, took to Toronto’s downtown streets on Tuesday evening.

From 8 p.m. to at least 8 a.m., throughout the winter, the full-size vehicle will pick up homeless and transients, the hungry and the shivering, in an undertaking so straight-up sensible one wonders why nobody ever thought about it before.

“We recognize that homelessness in particular is a critical issue here in Toronto during the winter months,” says Zubair Afzal, president of Ahmadiyya Muslim Youth Association, Canada’s largest Muslim youth organization, with chapters across the country and headquartered in Toronto. “The weather can be extremely cold, especially at night.

“The shelter bus will be travelling through downtown Toronto every night for the next three months, to pick up homeless individuals who do not have any shelter. And provide them with hot meals as well.”

There are, as per the most recent estimates, more than 9,200 people in this city of plenty who are homeless on any given night. Reasons for their indigent state cut across a broad spectrum — loss of employment, family breakup, family violence, mental illness, poor physical health, substance abuse, sexual abuse, to cite only a few of the underlying causes.

Most people, overwhelmingly, do not choose to be homeless, though there is a hardcore subset that prefers sleeping rough to the hardships associated with accessing a vast shelter system. A system with a nightly occupancy rate, in any event, of 98 per cent, with more than 100,000 on the subsidized housing waiting list. Seniors and youth comprise about 10 per cent of the homeless population.

In a city that can be cold-shouldered in so many ways.

“One of the fundamental teachings of Islam exemplified by the Prophet Muhammad, peace be upon him, is to give charity and serve humanity, irrespective of race, religion and ethnicity,” says Afzal. “In line with these teachings, the Ahmadiyya Youth Association is taking on this bus shelter initiative. We hope and pray this initiative can make a difference in the lives of many Torontonians by providing those less fortunate with a comfortable place to sleep during the cold nights.”

First of its kind, to anybody’s knowledge, the genius idea of an association member employed as a city planning engineer. All those decommissioned buses taken out of service, why not give them a second life?

“We acquired this bus because it was on its way to the junkyard to be retired permanently and taken apart for scrap,” explains Safwan Choudhry, one of the organizers. “Bringing together some brain power and some ingenuity, we were able to bring it back to life.”

At the bargain basement price of $10,000, from heap of junk to sleek retrofitted moving shelter, with funding from partner Humanity First but completely borne on the shoulders of volunteers.

So, the bus will be scooping up indigents who might want to park their weary bones somewhere for a few hours, accept a warm meal — food also prepared by volunteers but organizers have an arrangement with vendors should they run out — or maybe just a bottle of clean water and some hygienic products. There’s no nurse attached to the bus but that’s an idea they’re looking at, maybe to join the volunteer crew once a week. Only the bus driver is paid.

“Sadly, in a city like Toronto you don’t have to go very far or try very hard to find those less fortunate,” sighs Choudhry.

The bus, which is parked in Vaughan when not on its downtown meanderings, has already been taken out for some pilot road-testing in targeted neighbourhoods such as Moss Park. Police have given assurances there won’t be a parking problem wherever it stops in the inner-city core.

“Our shelter crisis is nothing new,” notes Afzal. “However, our ambitions go beyond Toronto. These challenges exist in Vancouver, Calgary, Ottawa … Our projects don’t necessarily coincide based on what may be a short- or long-term issue, but something that’s systematic.

“Why not use the leverage of our youth and engage them in something good?”

The association informed the city about their intentions some time back. Got a high-five and good-luck but, well, you’re on your own.

The city provides more than 7,000 and transitional beds in 65 locations and through motel programs used mostly by families. Straining at the seams, the Shelter, Support and Housing Administration has a budget for 2019 of $235 million but expenditures, as of June, were already at $246 million, expected to be over-budget by $42.5 million by year’s end.

And still the homeless sleep over subway grates. Every year somebody will freeze to death.

The shelter bus is just a drop in the homeless bucket. But it’s tangible, directly serving the neediest among us. The wheels of this bus go ‘round and ‘round.