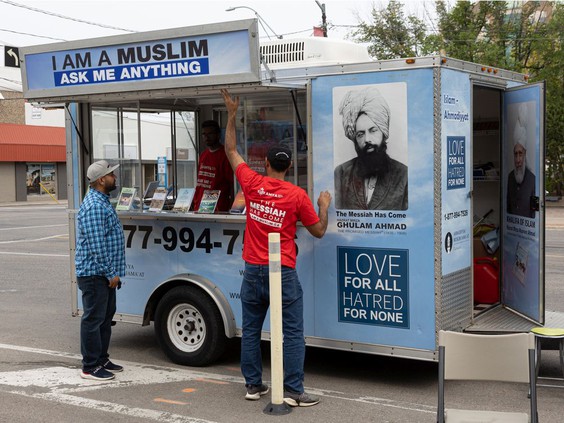 “It’s just about reaching out and letting people know.”

In Shahrukh Abid’s eyes, it falls on the next generation to start the conversation.

Abid, a member of the Ahmadiyya Muslim Youth Association, is part of a group travelling across Canada to talk to people about Islam and answer their questions.

“We’re young; it’s our responsibility to take care of Canada … We have this mission because Canada’s important to us, we live here,” he said. “Our fellow Canadians are also important to us as our brothers and sisters, so we just want to reach out to them.”

The campaign, called Islam in Motion: I am a Muslim, Ask Me Anything, seeks to combat Islamophobia and misconceptions about Islam.

“We tend to fear things we don’t know. So when we reach out to people, and they learn about us, I think that fear aspect goes away,” Abid said. “So people are more comfortable with us. And I think that will decrease Islamophobia here in Canada.

“It’s just about reaching out and letting people know.”

On Thursday, the campaign’s trailer was stopped at the corner of 23rd Street East and Third Avenue North outside the Frances Morrison Library, with a few groups walking around downtown and striking up conversations.

Since leaving from Toronto, the campaign has visited Montreal, Cornwall, Ottawa and Winnipeg and spent Wednesday in Regina.

One question the group receives often is about the identity of the man in a photo on the group’s trailer — Ahmadiyya founder Mirza Ghulam Ahmadas. The Ahmadiyya Muslim community, part of a revival movement within Islam, believe him to be a prophet sent by God to share the Islamic teachings of peace and brotherhood, Abid said.

“So they ask, ‘Who is this person? What are you guys doing here?’ And then they usually ask questions about, like, is Islam religion a terror? You know, things like that.”

Reception across the country has been largely positive, with people generally approaching with respect, curiosity and kindness, Abid said.

“Ninety-nine per cent of our interactions have been really positive. Obviously, we had that one per cent that’s a bit hostile. But you know, we’re okay with it. We were prepared for it.”

The campaign’s last two stops are in Calgary and Vancouver.