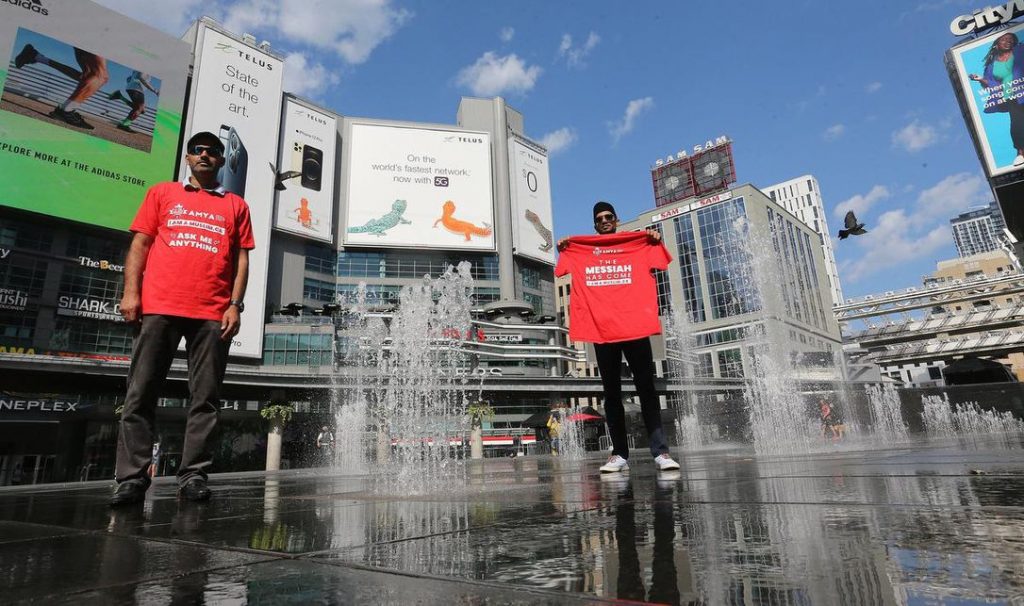 A national campaign led by Muslim youth making its way across Canada completed its Toronto stop on Saturday, where volunteers use open-minded conversations with strangers to tackle the Islamophobia that continues to exist in the country.

The campaign, titled “Islam in Motion: I Am a Muslim, Ask Me Anything,” consists of a mobile exhibition and volunteers from the Ahmadiyya Muslim Youth Association Canada (AMYA) eager to talk about their faith. The campaign began in Montreal on Aug. 13 and has completed about two dozen stops so far.

Jari Qudrat, 27, a campaign manager for Islam in Motion, was one of the volunteers at Yonge-Dundas Square inviting passersby to ask him anything about his faith. Being in the biggest city in Canada — coincidentally on the 20th anniversary of 9/11 — hasn’t been that different from other cities and towns Qudrat has campaigned in so far, he said, except for seeing a more multicultural crowd.

“We recognize that today’s an important day and understand how this event and other events in the past have changed the perception that may exist about Muslims,” Qudrat said. “Luckily, thankfully and gratefully, the conversations that we’re having with people today are far beyond that.”

Amidst the bustle of Toronto’s downtown core, Qudrat found himself engaged in open-minded conversations with strangers who ask questions as broad as, “What do Muslims believe?” to specific questions about traditions like Ramadan.

Throughout the campaign, Qudrat said that terrorism and extremism have come up a few times. But he sees it as an opportunity to talk about how Islam’s teachings focus heavily on peace.

“It’s an amazing opportunity for us to share with people that Islam is a religion of peace and that Muslims believe in (the) notion of a peaceful and cohesive society,” Qudrat said.

Safwan Choudhry is the director of communications for the Ahmadiyya Muslim Jama’at Canada (AMJ), the charitable organization that AMYA belongs to. Choudhry says that volunteers sharing their personal experiences during these conversations is just as educational as sharing facts about their faith, especially for younger volunteers who might not be expert theologians just yet.

“Sometimes there’s a question about integrating into Canadian society and (non-Muslim Canadians) don’t realize that these Muslim youth have a very similar lifestyle to fellow Canadians, whether it’s their love for hockey or their same interests and same hobbies as everyone else,” Choudhry said.

The campaign is a product of the AMJ’s heavy reflection on Muslim Canadians’ places in the country after the deadly attack on a Muslim family in London, Ont. The main question they had, Choudhry said, was: “What is our role in helping rid these misconceptions and misinformation that sometimes yield to hateful attacks against Muslims?”

The exhibition’s next stop is London, three months after the tragedy that helped inspire the campaign. Qudrat hopes that London residents are especially open to learning about Islam as the city’s Muslim community continues to heal from the attack.

“We find that when these anti-Islamic sentiments take place and these attacks happen, it raises awareness and people start to pay close attention towards what’s happening and maybe towards the religion of Islam as well,” Qudrat said.