From paramedic HQ to a retirement residence: Four Christmases in the capital 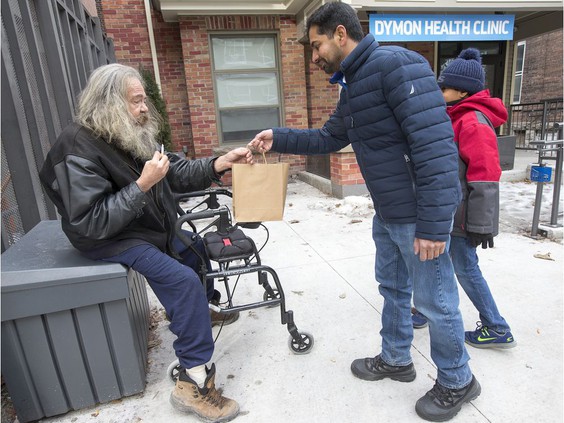 Anees Ahmed, with his son Khaleeq, 8, delivers a gift bag to Claude Gratton outside the Ottawa Mission on Christmas Day. Photo by Wayne Cuddington/Postmedia PHOTO BY WAYNE CUDDINGTON /jpg


Anees Ahmed credits Islam for his decision to spend Christmas Day in downtown Ottawa dispersing sandwiches and bagged lunches to people in need.

“One of our Islamic teachings is to give charity, and serve humanity. It’s a part of our faith,” he said. “Especially in the time of holidays, we feel it’s our responsibility to give back to those who are less fortunate.”

Ahmed is one of a group of local volunteers with the Ahmadiyya Muslim Youth Association, a service-oriented network with branches across the country. For the past three days, volunteers have taken to the streets of Ottawa with hot meals and gift bags.

“It feels amazing,” said Yahya Khan, who’s originally from Pakistan and arrived in Canada in 2014. “It’s just fulfilling our obligations. It’s a humble effort in doing that.”

Ahmed’s eight-year-old son, Khaleeq, approached a woman outside the Ottawa Mission, offering her a bagged sandwich, muffin and chocolate.

“Oh how nice is that, thank you. Lunch and everything,” she said. “Did you have Christmas?”

Khaleeq told her he didn’t.

“I don’t do Christmas, either. It doesn’t make sense to me.”

She doesn’t object to all holidays, Melva Knapp later explained.

“Non-religious holidays like New Year’s. I’m in.” But at Christmas, “Everybody’s depressed, spending way too much money on whatever. I just don’t get into it,” she said.

Knapp spent her Wednesday visiting a former neighbour in hospice at the Mission: a worthwhile way to spend the day, she said. She was impressed by the generosity shown by Khaleeq and his fellow volunteers.

“I think it’s awesome that children get involved in giving. Because giving feels so good. People don’t get that. I would rather give than receive.”