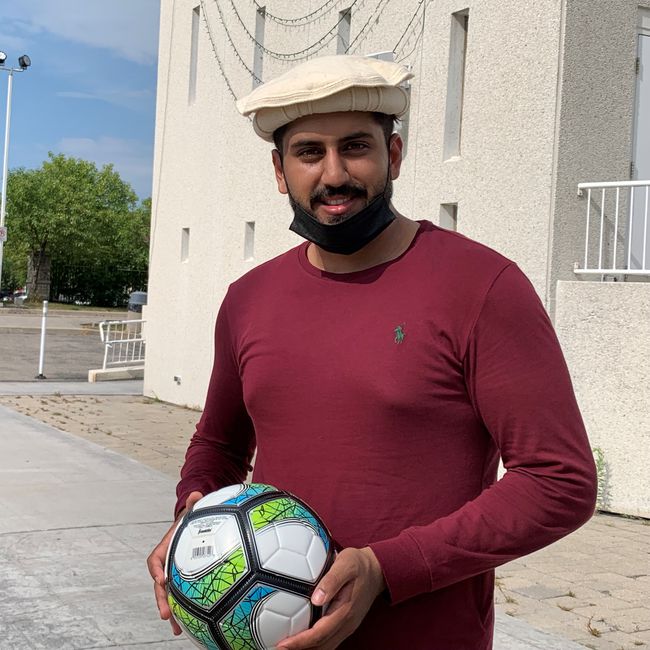 Vaughan resident Jari Qudrat was one of hundreds of Muslims who finally got to see friends Sunday missed during the pandemic.

“The feeling is indescribable,” he said. ”The spontaneity of meeting people is something we’ve been deprived of. It’s something special.”

Sunday was the start of the four-day Masroor Sports Tournament organized by the Ahmadiyya Muslim Youth Association.

The Masroor Sports Tournament is named after the head of the world Ahmadiyya community — Mirza Masroor Ahmad.

Qudrat says he has enjoyed building friendships over the last decade growing up in Canada as a part of the Ahmadiyya Muslim Youth Association.

At the sports event Sunday at Vaughan’s Tahir Hall Community Centre, he says he sees smiles all around.

“Everyone is feeling the same thing,” said Qudrat, 27. “Being at home for two years, it makes you appreciate things like this.”

Last year’s tournament was cancelled because of COVID. This year, the tournaments were resurrected but with fewer spectators due to capacity limits.

The tournament consists of two sports: Badminton and soccer. Badminton was played Saturday and Sunday. Soccer was planned for Sunday to Tuesday. Monday and Tuesday’s games will be at North Maple Regional Park.

The association expected around 1,000 youth from across Canada this weekend, said Zubair Afzal president of the Ahmadiyya Muslim Youth Association.

“It’s exciting. We’re meeting all these Muslim youth across Canada. This is part of life we’ve never realized we would miss,” Afzal said.

This tournament is a fundraising event, with proceeds going toward community health care initiatives. The Ahmadiyya Muslim Youth Association has committed to raising $2 million to support the Cortellucci Vaughan Hospital.

Other fundraisers include blood drives, food drives and Run for Vaughan.

The youth association partnered with charities and hospitals across Canada, Afzal said.

“As we creep out of the pandemic, we realize how important health care is,” Qudrat said. Building stronger health care infrastructure will help future generations, he said.

“The patriotic nature of giving back to your country is something really instilled in us through the Muslim faith and through the Prophet Muhammad who said loyalty to country is part of our faith, Qudrat said.

Part of the teaching of Islam is to come together and serve humanity, said Hassaan Shahid, a member of Ahmadiyya Muslim  Youth Association. Another teaching is to enjoy “a sense of unity and brotherhood.”

“We decided it was timely to raise money to support front line workers and health care initiatives,” Shahid said